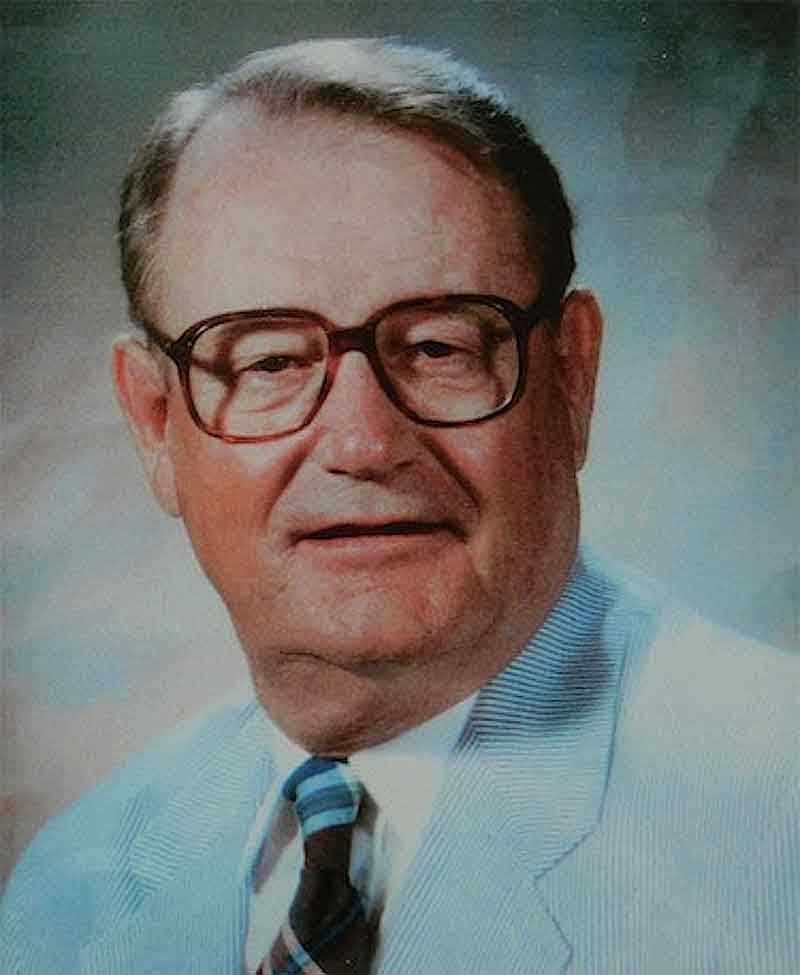 The March Family Endowment was established in 2003 for the benefit of the Adams County Historical Society (ACHS) P&IN Depot restoration and maintenance projects. 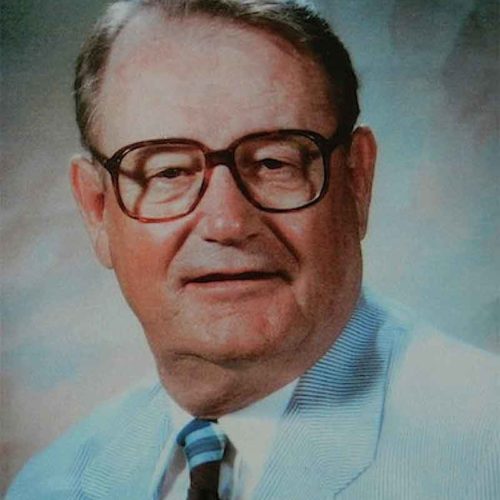 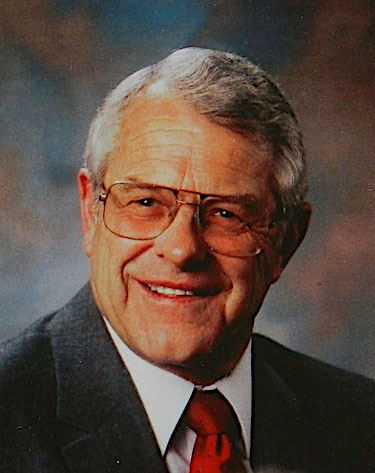 William March was four years old in 1929. He had five older siblings and a collie dog named “Jack”. Bill’s father built and owned meat markets in both New Meadows and Council from 1925-1931.

Meat was sold and the parts that didn’t sell, now considered delicacies, appeared on the March Family’s dinner plates. Oxtails sold for 25 cents per lb., Alaska salmon, Great Lakes smelt, and East Coast cod, packed in barrels, were delivered during the season weekly by truck from Seattle.

Next-door was Joe Caha’s creamery. LaFay’s pool hall and barbershop and Irvins’ Garage (formerly Shaver’s and presently Meadows Valley Market) on the north side faced south and across the street were LaFay’s Theater.”

As a four year old, Bill spent hours alone creating his own routine while his older brothers and sisters attended school. He would grab his dog Jack’s ruff and head down town.

Home was near the Odd Fellows (IOOF) hall, a building that had been one of the town’s five brick buildings that began its life as a bank. Young Bill would meet fellows along the street and would talk them into a nickel for an ice cream cone at LaFay’s Soda Fountain or a pot of cream at Joe’s. On his way home he would head down to the depot to visit with the station agent, in hopes of maybe seeing a train arriving from Council, that came to town 3 days a week.

One day, his sisters took him to the depot with the promise of a train ride to Council for his birthday. He still hasn’t forgotten the mounting anticipation, then disappointment of returning home for a “surprise birthday party” but no train ride.

Shortly after Bill completed the first grade the family moved on to Council, Idaho. After Council the family moved to Gooding, Idaho, Boise, Salt Lake City, Denver and graduated from Twin Falls High School at the age of sixteen.

Many of his summers were spent in McCall, Idaho with his aunt and uncle. Bill attended Mechanical Engineering School at Iowa State under the Navy V-12 program and went on to serve aboard ship in the Pacific Theatre in World War II.

The summer of 1992, along with two of his three children, he came back to Twin Falls to attend his 50th high school reunion. He traveled to New Meadows, stopped to visit with Bud LaFay at LaFay’s Barber Shop where he learned about the effort to preserve the depot. It was at that moment he became a supporter of the Depot Restoration Project. Both he and his wife Margaret are very much interested in preservation and have been very supportive of charitable efforts to preserve the past.

“From my eyes as a child, the depot was the largest building in the world.” Bill has fond memories of the adventures of his childhood in Meadows Valley. He claims Meadows Valley to be the prettiest place in the world and has had a lifelong love of trains.

Mr. March passed away in March, 2014 then the following September the ACHS received a check in the amount of $100,000 from the Estate of William March. Those funds will be used for matching grant monies and restoration, renovation projects.

Will’s Grandfather Frank Kerby homesteaded in Long Valley (south of Cascade , Idaho). Will’s father was born in Long Valley 1898. In 1928 Will was born on a ranch in the Alpha area in Long Valley. Will surmises that growing up around the remnants of early ranch life peaked his curiosity for old things. Remembering fondly his childhood, he loved the sound of the Shay (logging trains with multiple drive wheels used to negotiate steep inclines) moving out of the mountain canyons not very far from the one-room school he attended in Alpha School.

Affectionately he recalled an engineer friend letting him pull the train whistle. Will’s Grandfather, John Morgan worked in logging in Nova Scotia, Canada from thereto Minnesota where he was a master mechanic for Weyerhaeuser and from Minnesota to Cascade, Idaho still with Weyerhaeuser after there a short time, Boise Payette lumber company took over the Weyerhaeuser operation at Cascade.

Will’s Grandfather retired in 1941 and the Company contacted Jack Morgan and asked him to take his Dad’s place which he did. In 1946 Jack purchased The logging division at New Meadows from Boise Payette Lumber company and named it J.I. Morgan, Inc.

After Will graduated from Cascade High School he worked summers on the ranch. Will attended the University of Idaho for two years. In between school years he worked summers for his Uncle, J.I. (Jack) Morgan. When the Korean conflict came along he spent two years in the army. During a time when he was home on leave, he married his wife Myrna who was from a California logging family. Will and Myrna raised 4 children.

Will always believed he would be a rancher like his father, but his Uncle Jack persuaded him to move permanently to Meadows Valley and work for the J.I. Morgan Logging Company. He started as a choker setter and never returned to ranching.

With the advent of the logging truck in the 40’s, J.I. Morgan did not have to relocate his young logging company. The trucks made transportation of timber less reliant on the rails.

Jack took over the lease of 94 acres of land when he purchased the company adjacent to the P&IN Depot on the southwest end of New Meadows from Union Pacific Railroad (UPRR). Will eventually took over J.I. Morgan, Inc. Through the years the rent of the UPRR property had increased so much that it made better business sense to buy it, which he did. That land purchase included the land under the depot.

WILL SAVES THE DEPOT

In 1973, had it not be for Will Kerby, the historic P&IN Railway Depot would not exist. It was Will that saved the depot from extinction when the Union Pacific Railroad wanted to tear it down. Because UPRR, who owned the depot, considered the depot structure a liability, they asked Will to tear it down. Will said “no” and saved the building from destruction. After Will had multiple discussions with the UPRR officials and the City of New Meadows UPRR gave the Depot to the City. In 1978 the newly formed Adams County Historical Society (ACHS) purchased the building from the City at an auction for $1. However, the land under the depot still belonged to J.I. Morgan, Inc. In 1994 J.I. Morgan, Inc (Will Kerby) donated the original P&IN Railway Depot to the ACHS and that made the package complete. As owners of the building and land the ACHS could then apply for matching grants. However, due to unforeseen land ownership issues, the land didn’t officially change hands until 2001 when Will’s son Kyle, who took over J.I. Morgan, Inc. after Will retired, signed the final document. This was a legal process that took 7 years.

As President of J.I. Morgan, Inc. Will received accolades from the logging industry, served on numerous national, state, local boards and committees. Will received an associate honorary degree from the University of Idaho for serving on a university Forestry guidance committee. Will said one of his most valued awards was given to him by the Intermountain Logging Conference, the conference is made up of 24 directors from four north western States and British Columbia. It was the Don Mackenzie Award. Don was the first president of the conference. The award was for the recipient contribution to the timber industry. It seems appropriate that to the west of the P&IN Railway Depot is the J.I. Morgan office, shop and yard. Without Will’s generous support, foresight in saving the building, the depot would not exist. Continuing his philanthropic actions including deeding land under the depot to the ACHS and endowments, the ACHS has been able to move forward through the years working toward the restoration of the magnificent and historic building.
The quiet philanthropic J.I. Morgan Logging Inc. tradition, that started with Jack Morgan, continued on with Will Kerby and then Will’s son Kyle.
Sources: Will Kerby, “End of the Line” ACHS September 2003 newsletter, Marla Krigbaum; The Star News, July 7, 1994 Linda Williamson.